The Second World War ended seventy-five years ago, the anniversary year of the Covid-19 pandemic.

Although we postponed most of our readings and events this summer, author and historican Christian McBurney, decided, after viewing our grounds, that he could share
his seventh book with fifteen of us (the number currently allowed for outdoor, socially distanced, mask wearing gatherings), “Untold Stories from World War II Rhode Island (2019: History Press).”

McBurney, a graduate of South Kingstown High School and Brown University, is also a partner at Arent & Fox in Washington, D.C..
We did could not, and regrettably, share his many rare and unusual pictures on an accompanying slideshow. He did allow us a sample (see below).

Rhode Island is one of the only states in the country that still honors VJ Day, August 10 (Victory Over the Pacific or Victory over Japan). As we lay yesterday cozily on a hot summer’s private beach, a prop plane streaming a banner reading “#Re Name VJ Day” flew over us. I wondered if I hadn’t been able to attend McBurney’s reading and learned about Rhode Island’s participation in the battles that subsequently ended the most horrific war in human history (with an estimated of over 65 million dead), I would have thought twice about this suggestion.

As a bookseller and historian, myself, first and foremost we endeavor Books on the Pond to be a place where people can gather and speak without fear of recrimination. As a free society, we must be able to purchase and read books that we wish to read with a sense of freedom from judgement.

But today I am overly cautious writing this post – how many people will I offend with my thoughts about the current attempt to ‘rename history’? Will they garner “social media shaming”? As someone who, as an adult has lived with and without social media, I am fairly sure when I argue that social media neither prompts nor encourages deep or critical thinking. A blog is a social media outlet; and here I am, as a writer writing on a platform for our bookstore and its readers. Go figure.

Several decades ago during college, I worked nights in the basement of a very large university’s library. My job was repairing its collections’ books. I was also a double major – in political science and German, with a minor in history. I liked the quiet hours, fixing books. I learned a lot about the quality of printing and production, finding first editions and spotting fakes. One day I was assigned to repair the torn binding of “Mein Kampf.” Outraged, I complained to my supervisor. I am lucky she answered as she did, because later, in my post graduate work, I would know why I would have to read it in order to write my own book on the time period. “We have to preserve what happened so it never happens again,” she said and that was that. (This book, Mein Kampf, is a very good demonstration of what happens when people do not read a book). More people should have tried, translated it, and known that this mad world leader was serious about his insane and utterly sick plans.

I have read Hiroshima by John Hersey, and never forgotten it. I was also living in Munich during Chernobyl and the Germans were hoping the wind would not blow a certain way.
These are some things one remembers. 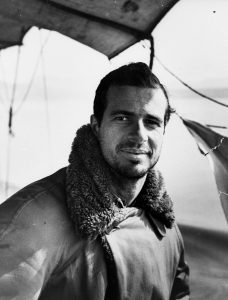 John Hersey, a writer recognized for leaving himself out of history

McBurney always asks if there are any veterans from World War II in his audience. He has never had one. Until Books on the Pond’s reader, Bill Twardy’s father-in-law, Joseph Rizzo was scheduled to attend. (Unfortunately he took a fall shortly before the reading and could not join us).  Rizzo was 19 when he took part in storming the beach at Normandy. He lives now in South Kingstown and only talks about it when asked.

Untold Stories from World War II Rhode Island (History Press, 2019) is a book that includes the history of how Rhode Island was crucial in building the military equipment – pontoon aircraft, for example, to navigate the waters in Northern France. Did Private First Class Joseph Rizzo presumably ride on one as he encroached upon enemy shores. Do we think about the sacrifices that many Rhode Island men made as they designed and tested these special operations for overseas deployment?

History happens in context. There is a before, during and after each event. As I see it, no two periods of time can ever exactly be the same; as an individual is. I wonder what Joseph Rizzo would say of renaming Victory Day. Does he ever forget the June day when he summoned the courage to take part in what must have seemed impossible? Yes, we had a known, common enemy. It was war, and yes, in 1945, freedom prevailed.